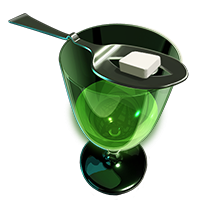 What Is Absinthe? Absinthe is an alcoholic liquor made from a blend of herbs. Among the most popular herbs used for production are anise, licorice, hyssop, fennel and most importantly, wormwood (artemesia absinthium). Absinthe is also known as the Green Fairy ("La Fee Verte") and is often characterized by its green colour. This green colour comes normally from the blend of herbs used, though certain modern absinthes are clear as well.

Most modern commercial absinthes have high alcohol concentrations ranging from 40% - 70% (80 - 140 proof). However, most also have a low level of thujone (the active chemical in wormwood). Absinthes supposed special effects of greater clarity of thought and creativity comes from the mixture of the high concentration of alcohol and the mixture of herbs including wormwood.

The Effects of Absinthe

Absinthe is often said to have a "special effect". This Absinthe effect is often attributed to the high level of thujone that is found in the original production of the drink. These effects are often contested however and no scientific study has ever been done to fully confirm the validity of what is commonly accepted by absinthe connoisseurs.
On our part, we have received a lot of customer feedback and it all indicates, from our viewpoint that the higher the concentration of thujone, the more likely these secondary effects are to occur. Traditionally, absinthe contained thujone within a range of 80-120mg. Most modern commercial absinthe however is limited to 35mg of thujone due to EU laws. It is only specific countries such as the Czech Republic which are able to produce the higher concentrated absinthe products. The secondary effects of absinthe have been reported variously as a clearness of thought, increased creativity and speech and minor hallucinogenic effects. These effects may be due to the effect thujone has on the Gaba-A receptors of the brain. By blocking these receptors, an absinthe drinker's brain is free to fire faster and more frequently.

Most absinthe brands are bitter, the degree a matter of individual recipes used.There are a variety of common methods for consuming bsinthe. The two most popular consumption methods are most commonly associated with the French and Czech respectively:

A shot of absinthe is poured into a glass. A sugar cube is placed on an absinthe spoon above the glass. Cold water is slowly poured onto the sugar cube.Louching (the milky colour in Absinthe from water being added to it) occurs. The rest of the sugar is then stirred into the drink

A cube of sugar is dipped into a glass of Absinthe on an absinthe spoon.The absinthe spoon is then placed on top of the glass and set alight. The caramelized sugar slowly drips into the drink. When the flame begins to die, it is blown out and the remaining sugar is stirred into the drink.

It is not recommended to drink absinthe straight because of its potency and pungent taste.

Absinthe was made illegal in many countries in the early part of the 20th century. However, recent court challenges in the EU have allowed the production and sale of absinthe once again. Throughout Europe, Absinthe distilleries have increased their production due to the burgeoning popularity of this drink. These days, Spain, the UK and the Czech Republic are the largest producers of Absinthe.

There are many great absinthe cocktails available. When mixing with absinthe it is important to remember that the anise is a strong flavor and it is recommended to measure its portion according to the recipe.